Last week was a long week and unfortunately I didn’t get much real estate related stuff accomplished.  Memorial day weekend ended with my wife getting some severe side pain and going to the emergency room.  She could not get into a comfortable position.  Luckily they took her in quickly and after trying two separate pain killers, they gave her morphine which finally took the edge off her pain.  2 hours later they found she had kidney stones.  Needless to say they admitted her and she spent the next two nights on heavy doses of pain killers.   On Wednesday the stone finally moved into the bladder and her pain went away so they sent her home to pass the stone which she promptly did 5 seconds after we walked into house.  Crazy right!?  She is doing good now, but has to get some other kidney stones broken up in a couple of weeks.

So for the remainder of the week I spent it with my wife just spending time with her and got nothing else accomplished.  Not a big deal cause the wife comes first and I never want to see her in that kind of pain again.  I about swore off getting her pregnant anytime soon.

The mailing I sent out 3 weeks ago from my Feb-March list started producing some calls.  Here are the stats…

I was quite happy with the response rate of about 8%.  I am getting frustrated though because I’m having a terrible time keeping track of people who called, their phone numbers and trying to find them amongst all my spread sheets.  This pretty much proves to me how much I need my LeadTracking program.  I’m really looking forward to uploading all my spread sheets and then easily searching for a lead by name, number, address or one of many other searchable data.  Even though that will only be one feature of many it will be worth the time it took to develop it.

After all the responses, I’ve got to get in contact with the 2 people who are “interested” and see what they are all about.  I will say the month I didn’t send mailers and that momentum I lost has set me back in my confidence in talking with the callers again.  What the Hell!! But I’ll get over it and get back up to speed.

Things are going well with the program even though I was slowed down last week and didn’t get much chance to work on it.  I’ve added Contact Information section where you can keep track of phone numbers and email addresses…

The other part I’m still working on but just about done is the section where you would keep track of the lead’s property information.  My goal here was quick entry and flexibility to later add or delete fields very easily.  For right now it’s only going to keep track of one property per lead, but I’ve designed it so that after the initial testing phase I’ll be able to add the ability to store multiple properties.  I just want to keep it as simple as possible for right now. 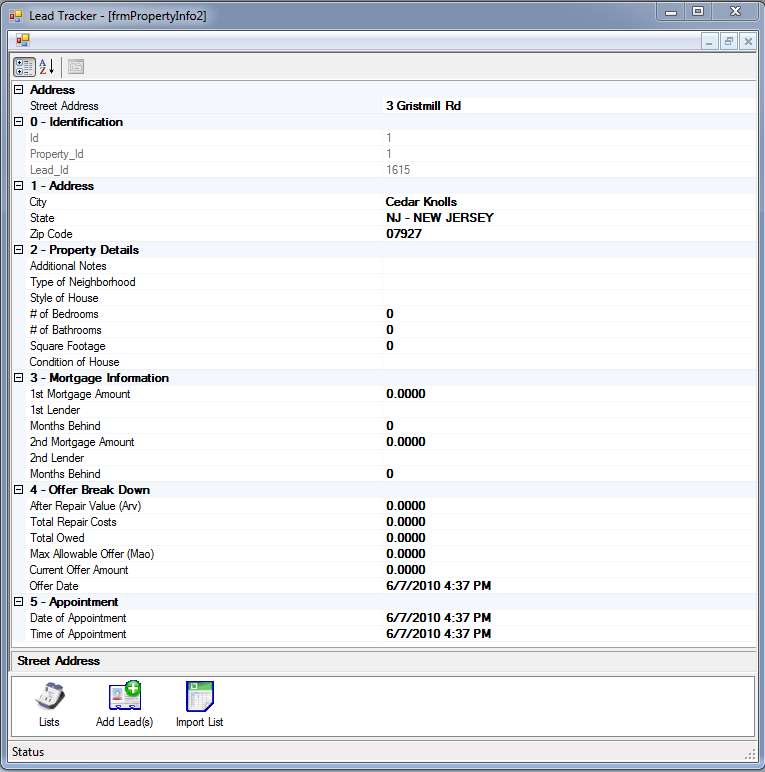 On or about June 18th, 2010 I’m going to ask 10 people  to test out installing the app on their computers so I can iron out the process as best I can.  Once that happens I’ll release the first beta version and setup a forum so we can discuss errors, improvements, new features and future releases.