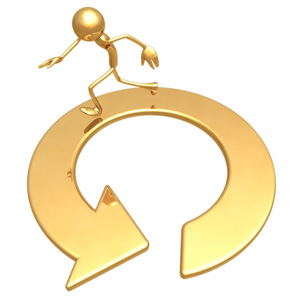 With all the setup, preparation and action that’s been accomplished so far I am now at the point of Rinse and Repeating until I get a deal.  The main thing I’d like to impress onto anyone following along is to stay consistent and develop a routine that can be easily followed and repeated.   Here are the steps that I will be taking each month from now on…

Step #1: Build my probate mailer lead list. However you have decided to get your list, this is where you must start.   I’m getting my list through a lead source that gets me the leads right around the 1st of the month.  I just got December’s leads last week (89 more leads!! you see that Jason ).   If you are building the list manually you may choose to schedule your routine differently, but just make sure you are able to be consistent.

Step #2: Send out Probate Letters from Prior Months List. The probate list I receive on the first contains all probates from the previous month (so i just got December’s probates).  The first week of the month I will print, stuff, address, seal, stamp and send the letters.

Step #3: Answer the Phone! and talk to sellers. I’ll most likely start getting calls in week 2 and 3 of the month.  Answer the phone or if they left a message call them back as soon as possible.  At first I plan on setting up appointments to go see the house and do all the talking in person.  As I get more experience I’ll start doing more of the digging on the phone in order to save my valuable time.

Step #4: Sending out Follow-up Postcards. the fourth week of the month I will send out follow-up postcards to anyone who hasn’t contacted me yet.  I will also send out thank you postcards to those who have contacted me.

Step #5: Answer the Phone! and talk to sellers. To finish out the rest of the month I will be fielding phone calls from all the leads who want to sell me their houses.

That is my monthly 5 step plan to success.  I’m excited to get the ball rolling after not getting much accomplished over the last two weeks of Christmas with the in-laws and New Years Eve in Vegas.   For how much I accomplished in 2009 I could not be more amped about this year.

For those interested, I had a pretty good time in Las Vegas for New Years Eve.  My wife, myself and 10 other friends and family flew out to Las Vegas on December 27th.  If anyone knows Newark Liberty Airport in NJ, they know it routinely ranks in the top 3 of worst airports in the US when it comes to being “on time”.    They managed to hoard us all onto the plan “on time”, but we sat on the runway for about an hour before taking off which is GOOD when it comes to EWR.  The problem was that the high winds forced all planes to take off from the one, downwind (or was it upwind??), runway.  On the trip home, we got delayed 2 hours in Vegas because of windy conditions in NJ and then circled Newark Airport for another hour before landing.  Big Ben, Parliament!

We arrived in Vegas at 1pm, got our rooms in the MGM Signature, took a shower and settled in.  Before I get to into what we did, I want to give you a little back ground on myself…I don’t drink at all (only one sip of a beer years ago…gross!!) and if you put me in a loud, crowded place full of people drinking I’m miserable…So you may be asking, “Why the HELL did you go to Vegas for New Years Eve?”  The short answer…I have no idea.

Even still I had a good time.  I liked walking around the different hotels (New York, Paris, Luxor, Mandalay Bay, Bellagio), taking pictures with my new camera.  I will say it takes forever to walk from one hotel to the next even though they are right next to each other or across the street.  We went on the roller coaster at NY NY, which was very cool.  One of my favorite things was the water shows out front at the Bellagio, the height the water is fired is crazy!

My wife Loved the Crapes at La Craperie in Paris.  We went twice!  Also if you have never seen Cirque De Sole ‘O’ it’s just an amazing show with an even more incredible set.

At 12:0oam on New Years we all gathered in our friends room and watched the fireworks from their balcony.   There were no less then 5 hotels who launched a spectacular display of fireworks off their roof tops.  It must have lasted for 30 minutes and was an awesome experience.

Hope everyone enjoyed their holidays!