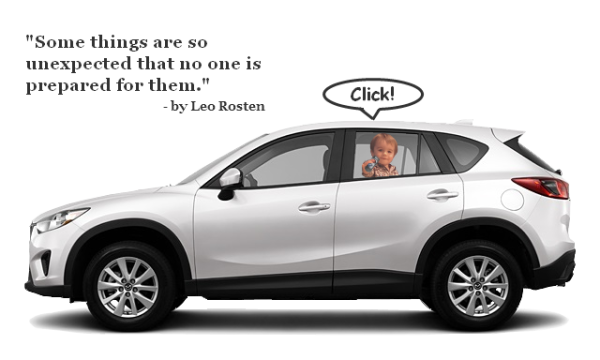 Getting life lessons always seem to happen when you least expect it.  At least I hope my life learned from hers.  The other day she had taken my 23 month old son to take a look at a day care we may want to put our son in next fall.  When the meeting was over she headed back towards the car and as 23 month old toddlers tend to be he was getting cranky.  Ben likes pushing buttons so my wife gave him the car keys to play with and she put him in the car seat.  We have a Mazda CX-5 and all you need to start the car is to have the key inside the car, so my wife let Ben keep the keys as she closed the door and circled around the car to get in.  Well….guess what happened.

Ben managed to press the button to LOCK the car door before my wife had a chance to open up her door.  She was now locked out of the car with my son inside of it!  Not only that but my son also pressed the distress button so the car alarm was going off as well.  And to top it all off it was raining.  As my wife started to panic and try and think of what to do next, she heard the door unlock.  Luckily Ben had pressed the button to unlock door.  Val acted fast and quickly opened up the door.  It’s hilarious to think about it now but I’m sure it was a very tense few moments for my wife.

The Lesson I Learned

The simple lesson in this is Don’t let your 2 year old son play with your car keys.  The bigger lesson is that

…you can’t plan for everything that is going to happen to you….

Who would have made this scenario up before and a said…”I better put a spare key in my wheel well just in case my toddler locks me out of the car”?  You have to be able to adjust and adapt to what is currently going on in your life.

Last summer my wife lost her job, my partner ran out of money and needed to get a job and our resources for sending out direct mail dried up.  So what did I do?  I didn’t give up.  I adjusted and pivoted to try and find other ways to bring in leads.  I need to stay in real estate because I love it and it’s my ticket out of my day job.

One of my goals this year was to finish the next version of SI Lead Manager and then begin to sell it.  The hope is that it will provide enough money so we can start our direct mail campaigns again.

I really love how version 7 is coming together.  I’ve simplified many aspects of it and added some great features that many users of beta 6 have asked about.  Take a look at some of the screen shots as a teaser to what it will have…

A lot of the heavy lifting has been done so far.  I still have a good amount of items to implement but I’m getting them done as time permits.  If I were to guess a release date right now, it’ll probably be mid summer of this year (2014).  I might have all the coding done earlier, but I’ve learned that formal bug testing is necessary before release.  That takes time as well.

A question for everyone….What is your biggest pain when it comes to keeping track of leads, direct mail and your lists?