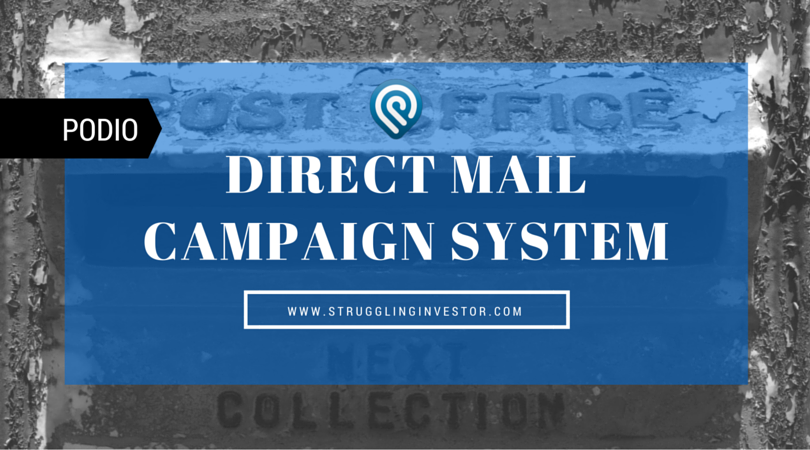 Thank you so much for your interest in my Podio Direct Mail Campaign Manager. I am sure you will have little trouble duplicating what I have setup and getting working for your business. If at any time you have questions or problems leave a comment below or send me an email at scott@strugglinginvestor.com.

What is this tutorial about?

This tutorial will show you step by step how I created my Direct Mail Campaign Manager using Podio and GlobiFlow. There are a total of 9 modules, complete with videos to help you set this up for yourself.

Why did I create the system?

I wanted a completely automated system for sending out my direct mail. This includes scheduling, mail merging, printing and delivery. If I could just upload a list of leads, assign that list to a campaign and then let it run…That would be PERFECT!

How Much will it cost you?

I’m not charging you anything for this tutorial. It’s fun for me to create these Podio setups and it gives me a chance to pay it forward because so many people have helped me out. While I may not charge you, you’ll need to spend some bucks on the lowest GlobiFlow package.

When you are done with this Podio Tutorial you will have a complete working Direct Mail Management System.  I recommend creating a dedicated Podio Workspace for this system. Workspaces are a great way to separate the different systems in your business. Since Direct Mail is different from my Lead Funnel System I broke them up into their own Workspaces.

To get a complete overview of this Podio direct mail system, go back and read my blog post about Podio Direct Mail Campaigns. Additionally if you want a deeper understanding on why I setup the apps the way I did then take a look at my blog post about The Proper Way to Setup Your Lead Flow in Podio.

Now it’s time to get at it. In this module I’m going to go over what you are going to be setting up in tutorials 2 through 11. Each section has a description, breakdown of the fields/actions that you will setup and finally a video that takes you through the entire setup.

The Direct Mail System is broken up into 5 different Apps…

The Podio side of this setup is very easy to do and shouldn’t be a problem for anyone. The GlobiFlow setup is where some people might get tripped up. I did my best to detail each step of the process so if you have copied everything I did then you should have no problem. Try not to make changes until you understand what is going on.

The first Podio App we are going to create is the Letters App. This is where I put all my letter templates.  The reason for having a dedicated app just for Letters is that it gives me the opportunity to reuse the same letter in different mailings and campaigns. Additionally it makes it easy to update the content of a letter in one spot.

Let’s take a look at the fields in this app…

The Mailings App is sorta your middle man app.  You’ll use it to define each of the separate mailings withing a campaign template. I’ll create a mailing record for each mailing I want to have in my template. While you can use the same Mailing in multiple campaign templates, I prefer to only relate one mailing to one template. Makes it easier to manage.

Here are the fields…

The Campaign Template App is the top level of the template. This is where I group my mailings together in one package to keep things organized.  There are only 3 fields in this app, but it makes it possible for you to quickly schedule your campaigns by just assigning the campaign template to a campaign.

You can add as many or as few templates as you want.  There are no Globiflow processes behind this, you just set it and forget it.

Here are the fields…

The Campaigns App is where everything comes together.  It controls the campaign by associating the leads to the template; says when the campaign will start; when the next mailing is; and handles the printing of the letters.

What makes this all work are the Globiflow Processes behind it.  Those processes are in charge of setting the mailing dates and sequence number; assigning the template; and printing out the letters.

In this module, we will only be creating the Podio App. All the GlobiFlow processes will come in modules 7 to 10. Here is a look at the fields in this App…

In this video I neglect to set the **Campaign Template to Use** field to a **Single Line** Field. Podio defaults Test fields to Multi-lined. Leaving the field Multi-Lined causes an issue with the Globiflow Process for Campaign Setup in which the Filter won’t have the **Does not equals** option.
6 - App: Leads

The Leads App is where you import all your lead lists into.  It is also where you will keep track of leads that have responded and leads that you don’t want to mail to anymore.  I keep track of those two things in a Category field called Status.

This App is very straight forward and can be expanded to include more information if needed.  These are the required fields for my Podio Setup.

As part of my efforts to make this process as automated as possible I setup a GlobiFlow process to run when a new campaign has been created. This is not a complex process at all. What it does is the following….

Here is a breakdown of what goes into the GlobiFlow Process Flow that you will create in this module. The video will walk you through the steps.

This video has an error in it. I forgot to include the “Create New Variable” action between Getting the Reference and Updating the campaign item. The Screen Shot of my GlobiFlow Process on the Screen Shot Tab is correct however. I’m in the process of recreating this video to fix the problem. 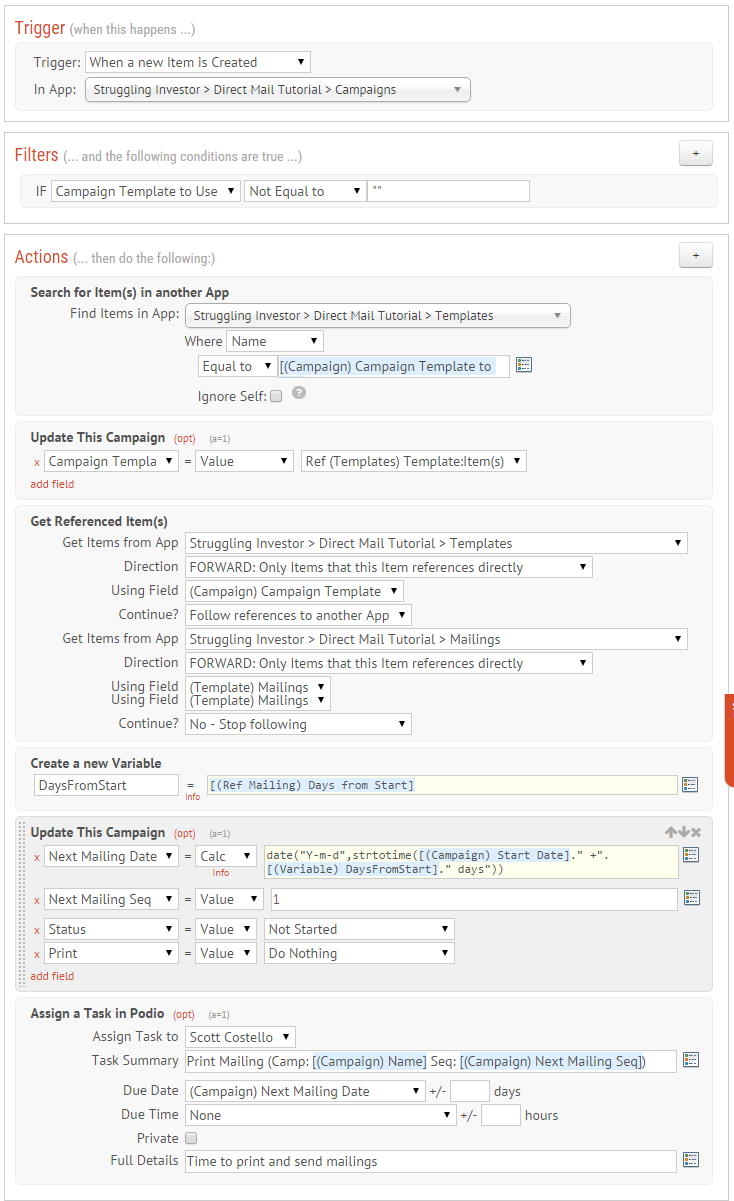 GlobiFlow allows users to Export their Flows in XML format which then can be Imported into someone else’s GlobiFlow. This is handy when you are trying to recreate an entire system for someone else. That is exactly what we are doing here so I’ve attached my Campaign Setup Export here.

Campaign Setup XML (right click and select Save Link as…)

GlobiFlow can do some incredible things and this process is a shining example of that. In this module you will create a Manual Flow that will determine which mailing a campaign is on, what letter to use and then pull in all the leads assigned to the campaign and print a letter out for each of the Active ones.

A Manual flow in GlobiFlow is a Flow in which it needs to be called by another GlobiFlow Flow. It won’t be triggered by Podio directly. The reason why I created a Manual Flow is because we are going to be calling this Process from 2 other Flows. No reason to have duplicate processes in different Flows if you can prevent it.

A word of caution before you begin this module…There is a lot going on here and it might get confusing. I did my best to explain each step and even created an over view video where I gave you a 10,000 foot explanation of what is going on. Hopefully you don’t have a problem. If you do, GlobiFlow allows you to export Flows to file and then Import them in. So I have included that export file in this module as well. You’ll see that after the Tutorial Videos.

I broke this video up into 2 separate vidoes because I thought it would help you if I explained what was going on first. So I created an overview video that simply broke down what this GlobiFlow Flow is doing. The second video is the Step-by-Step tutorial.

Error in Video – When you reach the part where I start creating the variables to do the mail merge the wrong variable is being used. There are 8 Variable Actions (7 Body & 1 Letter). The 7 Body variables are used to build (mail merge) the letter content. The first Body Variable is correct…

I will fix the video when I get the chance. Very sorry about this oversight on my part.

GlobiFlow allows users to Export their Flows in XML format which then can be Imported into someone else’s GlobiFlow. This is handy when you are trying to recreate an entire system for someone else. That is exactly what we are doing here so I’ve attached my Print Letters Export here.

In this module you will setup the Flow that will run if you manually click Print Mailing from the Campaign Podio App screen. All it does is run the Print Mailing Flow that we created in the last module. 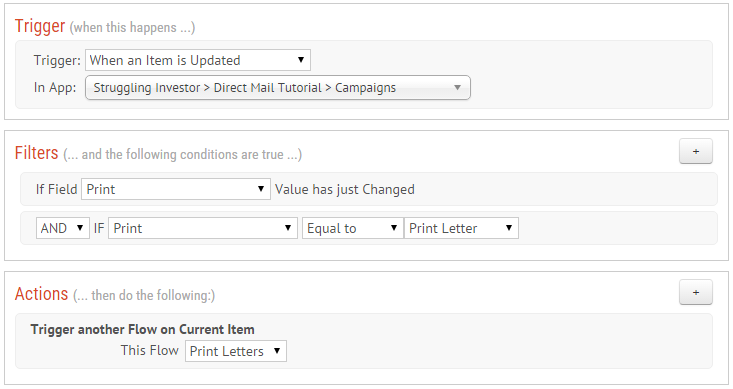 GlobiFlow allows users to Export their Flows in XML format which then can be Imported into someone else’s GlobiFlow. This is handy when you are trying to recreate an entire system for someone else. That is exactly what we are doing here so I’ve attached my Print Letters Button Press Export here.

In this module you will setup the Flow that will automatically print your mailings on the day they are scheduled to print. So basically this will completely automate your Direct Mail Campaign printing. If you are hooked up to Lob, another printer or even have hired a person to put your mailings together, you can have GlobiFlow email the PDF containing the letters so they can print, stuff, stamp, address and mail them.

What this Flow actually does is, every morning (3AM EST), checks all your campaigns to see if any of them are schedule to be printed on the current date. If so, it fires off the Print Mailing Flow for that Campaign. 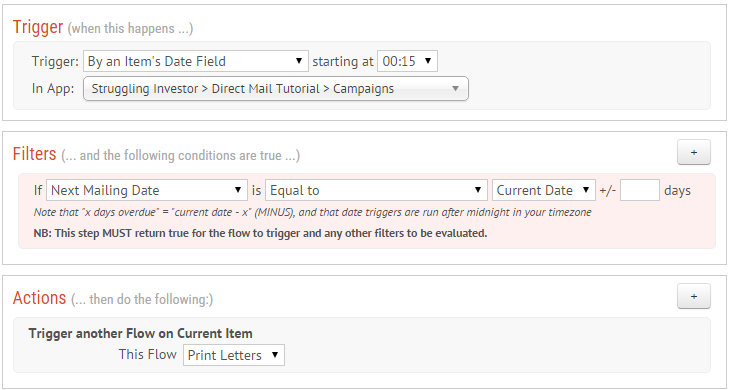 GlobiFlow allows users to Export their Flows in XML format which then can be Imported into someone else’s GlobiFlow. This is handy when you are trying to recreate an entire system for someone else. That is exactly what we are doing here so I’ve attached my Print Letters Automated Process Export here.

We have one final thing to go over before we are completely done…The Excel Import File. While this step is not hard, it’s important to get right or things may not work correctly. What this module will show you are the 3 columns that you need to add to all your lead lists before you can import them.

If you have everything setup and assigned to the correct Podio fields…a Campaign will be created for all the leads in the list. Watch the video below to see how this is done.

At the end of each of the GLobiFlow Modules I supplied the XML Export of each of my Flows. These files provide you with exact copies of my Flows. They can be imported into your GlobiFlow workbench and you’ll instantly have the Flow installed.

Please be advised that your Podio setups must match exactly how I have mine setup (App and Field Names, Types and Category options). If they are not exact then I can not guarantee that this will work.