Late last summer my partner and I could no longer fund our direct mail campaigns.  My wife lost her job and my partner was having some money issues of his own.  This all seemed to happen very suddenly.  I still have about 200 stuffed and sealed envelopes on my desk from last summer that are awaiting stamps.  What was my next move?

Luckily we had a deal that was going to close in early fall that would give us a slight influx of money.   My partner’s share needed to go to paying his bills so we only had my share left to reinvest… It was only $3000.  That doesn’t go a long way when it comes to direct mail, probably 4 months for us.   I did not like the thought of putting the remaining 3k towards direct mail and hoping to get a deal out of that money.  There had to be a better use of the money to bring in leads. 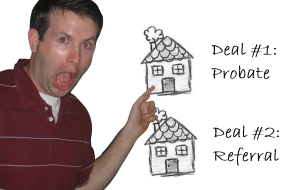 One of my goals for 2013 was to create webpages and combine that with SEO tactics to bring in leads.  This was going to be where I reinvested the money.  It made sense because it was something i could build up over time and would always be working for me.  Direct mail to me is a one and done kind of thing….Once you spend money to send out a batch of letters, the money is spent and you need to get some calls.  If not you need to spend more money on more DM and hope to get calls.   With a website, you spend money for SEO or on content and that is ALWAYS out there and ALWAYS working to pull in new leads.  I like that!

Great great feeling considering that back in September I thought I might have to give up on wholesaling for awhile.  Not only that, but as luck would have it we got a call from a lead we sent a letter to back in 2011.  This person had a house they needed to sell and we got another deal out of that!!

I received this lead in my inbox on 3/17/2014.  The seller found my SellYourNJHouse.com website by doing a Google search and submitted the property’s information through the site.  This was during a 2 week period where my site jumped to #1 in google for the keyword “We Buy Houses NJ” and I got a record number of leads (21 to be exact).

“We are looking to sell the property yesterday!”

A motivated seller is one of those things in life that is tough to explain but you know one when you see one.   This person actually said that they need to sell the property yesterday.  As real estate investors we love to hear that!

We initially offered 35k which wasn’t received to well, but the owner said they would think about it and call us back.  Two days later we got a call back and they asked if we could go up to 40k.  By this time we had already spoken to one of our top buyer and he interested and had given us an offer of 40k.  This means we couldn’t meet the sellers asking price…We countered back at our max of 35.5k.  After another few days they accepted….YES!

We now had a signed contract and a buyer, just had to get to closing.

The title work came back clean, but in order for the title company to give us title insure they wanted to know more information about the probate estate.  This is where things got fun….

This apparently sent the seller into a rage because she didn’t want or see the need to pay an attorney thousands of dollars for any reason (her words).  She started cursing at the title company and now she was pissed.  Also now we are unable to get title insurance because she won’t fill out the form, which means we aren’t closing…GREAT!

This is where knowing your buyer really well is a huge advantage.  We explained the mess to him and he just told us to forget about the title insurance and get the deed transferred.  He was going to rent the place out after fixing it up so it wasn’t a big deal.  The title had come back clean and the insurance is to protect him against any leans the title company may have missed.   He was okay with this so we went ahead and assigned the contract to our buyer.  Yesterday our buyer closed the deal and gave us a nice Check!

Like every deal, I learned a few things.  First of all I learned that you can get deals from the internet and I believe that it is a quality source of leads not just an extra source.

Second…I learned you can close a deal with out getting title insurance.  Though I wouldn’t recommend it, but if your not going to be on the chain of title then it’s up to your buyer.

Third…People can get crazy over the strangest things.  You figure someone would want a lawyer in order to protect their interests.  This person just seemed to have something against them and wanted no part of hiring one.  This is strange because in NJ as almost all real estate transactions have an Attorney Review period and the closings are done by Real Estate Attorneys.

When you send direct mail to sellers sometimes they just hold on to the letter.  In this case the seller held onto the letter for 3 years!!  This lead was one we picked up while driving for dollars back in 2011.  The house was in Trenton which unfortunately we do not work in anymore.  We do however have a relationship with another wholesaler who works that area.

Of course they were interested in the lead and we worked out an agreement. I don’t have a ton of details on this one but they got the contract and closed the deal last week.  I’m going to keep our agreed upon split a secret just to protect everyone involved.  With that said this was the easiest money we have ever made.

First thing I learned is that you never know when a deal is going to come and from where.  It pays to keep intouch with all leads that haven’t said to stop.

Second thing I learned is that don’t let leads go to waste.  If you don’t work in a particular area find someone who does and refer them the lead.  Referral fees aren’t quite as good as doing the deal yourself but it’s like free money.

Everytime I have a deal close I love to pay it forward and give something away on my blog.  Last time I, along with Ron Mead and Trevor Mauch (of investor carrot) put together some great deals.  I can’t promise anything to that extent but I’ll do my best to make it as valuable as possible.  Keep on eye out for the next post.