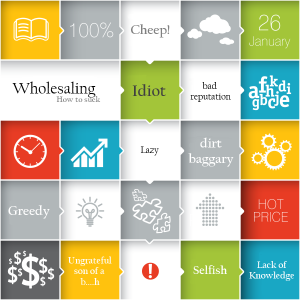 We all love GPS because it gives us the exact way to get someplace we want to go.  That is great and all but you really didn’t learn anything except that one way.  To truly learn something you need to know about what not to do and the consequences that come with it.  That is why I LOVE hearing about other people’s mistakes.

With that in mind I wanted to write a different kind of post.  This post is all about how bad wholesalers think.   I had fun writing this because I run into wholesalers who think like this all the time.

Having Problems Wholesaling Real Estate…do you think this way??

I bought a list of leads from list source for $150. It’s a list of people in my target area…Texas. I’ve heard that all you have to do is send out some letters and your phone will be ringing off the hook with motivated sellers. Well I got calls but none of them seem to be motivated at all. I’m throwing this list out and going to try another list.

“Leads always seem to call at the worst time”

Last week though was great! I got a chance to hang out with some friends and catch up on “the following”. My phone was ringing off the hook so I put it on mute. If they leave a message I can call them back later when I have the time…It’s crazy…all my leads seem to be dead ones.   Direct mail is bogus

“Ah..He’ll be motivated next week too”

This list I got was terrible dude. All the leads said they have already sold their property. Wtf!  How can they houses be sold already?  Why the heck did they call me last week then?

“It’s so much cheaper to get pre-paid postage”

I don’t know what is wrong. I sent out 5000 letters this month and only got 5 calls. All of them said something like…I was going to throw the mail out before opening it but thought it was a bill.  Sorry, we are not interested in selling.  Must be a bad list….next months results will be better for sure.

“It is to much work to update my lists”

I’m so afraid to answer my phone since my last mailing. I’ve gotten about six people yelling and threatening to press charges. Geez…some people just can’t take getting 5 letters in a two month period.  So what if they asked to be taken off the list.

“I feel so bad for them

Yo! I got this house under contract last week. The seller was so hard up…the husband left her for an older woman.  She had two kids and also just lost her job.  Said she had some money coming from a rich prince in Nigeria but it wasn’t coming in time to hold off foreclosure. I felt so bad for her and really wanted to help her out.  My max offer was only $20k, but I offered 50k because I felt so sorry for her.  I think I can break even on the wholesale if I find the right buyer.

I saw this house yesterday and it was so unique.  It had that old world charm…crown molding…high ceilings.  I could see myself living there.  It was such a nice house I had to get it under contract.  I had to go above what my numbers said but I couldn’t take the risk of another investor outbidding me.  I just had to have the house.

“I’m not going to get outbid for this one”

That investor…John…has been snatching up deals all over town.  I don’t know how he is able to offer so much for these properties.  What ever it takes I’m going to get the next house, even if I have to overbid to get it.

These deals…they are incredible!  I can’t believe they were so easy to find.  All I had to do was do a few searches on the MLS and they just jumped off the screen.   I must really be an expert at finding these deals.  I don’t know why everyone says that finding motivated sellers are hard…(a few days later)…Hmmm I wonder why none of my buyers are returning my phone calls.  I told them they can find the details of the houses on MLS.  They must not have gotten my emails, let me resend them.

“I did all the hard work”

The other day I got this sweet deal from a guy I met on Bigger Pockets.  He says he routinely finds distressed houses in his area and is looking for someone to give them to.  I only made a couple thousand on this deal and to be honest he really didn’t do much.  I could find these deals myself…easily!  Maybe I’ll flip him a few bucks if he brings me another one….you know as a thank you.

I got this phone call yesterday from the owner of a deal I was working on.  He was pissed because he saw a craigslist ad advertising his house for sale…for a price higher then what we were discussing.  He called the number on the ad and got my voice mail message.  He said…”We’re done” and hung up.  What they heck was that all about???  How am I going to resell the property if I don’t know what people would pay?

“Who knew they were going to build that??”

Who knew this house was in a flood zone?  I’m screwed!!  No wonder why it was sitting on the market so long and the seller jumped at my offer.  I’ll be lucky to get half my investment back on this one.  I didn’t know that they were going to build a highway right behind that house in the next few years.  Crap!!

I can’t believe my top buyer only wants to give me 40k for this property.  I got it for 35k but it’s a sweet deal!  I told him I couldn’t let it go for anything less then 50k.  He wouldn’t budge off his number so I decided to move on and contact a few other people…I’m going to get 50k if it kills me!

It’s been 3 weeks and the closing date is only 7 days away.  I called my “top buyer” back and offered it to him for 40k…he seemed to know I was being greedy the first time and he didn’t like that.  He declined to take the deal.  F*** now what am I going to do?

Whew…this week is going to be a busy one.  I have to go to the court house and pull some probate leads, scrub the list and then put together the 200 letters or so from the list.  Next I have to return 10 phone calls, go visit 3 houses as well as go to the REIA meeting on Thursday.  If that weren’t enough I need to post a few articles to my website and get some backlinks setup to keep my pagerank.  Crap!  I forgot I was out of direct mail supplies so I need to go to staples and the post office.  I also have a closing to go to on Friday and I have to meetup with a lawyer to go over a contract from a seller.  My phone keeps ringing with sellers and I can’t seem to answer them all because I’m either in the car or talking to someone else.  Damn…who just called and told me to take them off the mailing list?  I was going to research this property before making an offer but I just don’t have the time…ehh…52.5k sounds good…

“Title Work is for Suckers”

It’s all a scam to just get your money.  The title work always comes back clean anyhow so why should I waste my money?  Heck I’m never on title so why should I care…my end buyer is the one who has to worry about this not me.  Besides the seller can tell me if anything is owed.

A great way to make money is to take other wholesaler’s deals and market them to my list.  Don’t tell anyone but I markup the price by a couple thousand dollars.  This way I get a bigger piece of the action.  This works great except if one of my buyers is also on the other guys list…it really pisses them off.  I lose a few buyers here and there because of this but there are plenty of fish in the sea.

“I’m just looking out for myself”

Last month I was at an REI meeting and this new investor approached me asking for advice about a property.  It sounded like a great deal!  After we finished talking I looked up the owner from the tax records.  The next day I stopped by the house and talked to the guy into signing my contract.  Locked that puppy up!!…just wait till the other wholesaler finds out

“You can sell anything to a newbie”

One of the best ways to wholesale a property that you paid to much for is to bring them to the REIA meetings and pass out flyers.  You are sure to hook some “noob” rehabber who is all kinds of motivated to start.  They are fools and a dime a dozen.

What sort of wholesalers have you met that just make you shake your head?